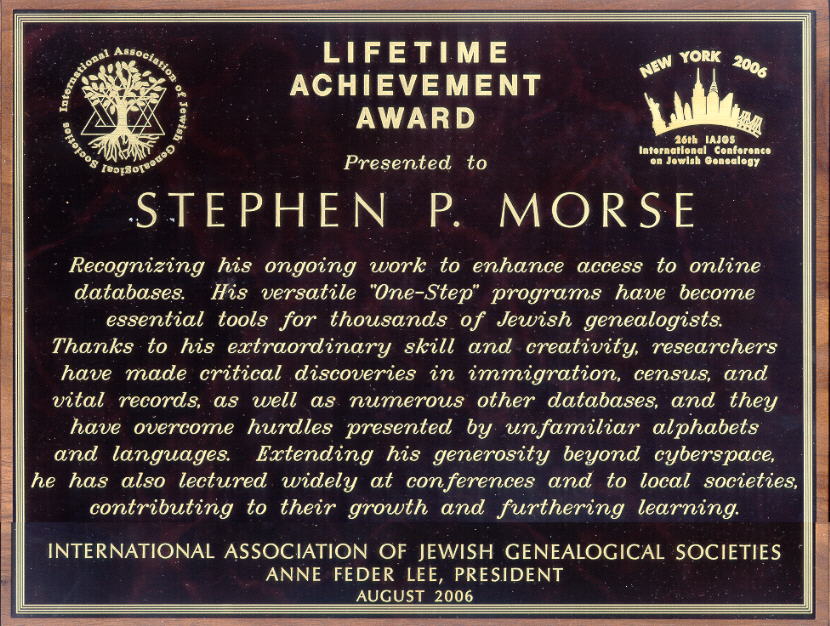 I feel strange about accepting such an award because I havent lived a lifetime yet.

This all started five short years ago when the Ellis Island website first went on line and I tried to find my wifes grandfather. I never could have imagined that my frustrations in finding that record would culminate in such an award.

When I first put up the One-Step site and started getting invited to speak before various groups, my wife would suggest that I wait until spring when the weather got warmer. I would reply that this was my 15 minutes of fame, and that by springtime they wouldnt want me any more. I guess I was wrong about that.

The first person Id like to thank is Gary Mokotoff for discovering me. Shortly before I developed my Ellis Island One-Step site, I signed up for an on-line newsletter with a catchy Yiddish title. In it I read that third-party tools were being developed for searching in the Ellis Island database. That was at 4PM. At 5PM I wrote to the editor and told him about my Ellis Island One-Step form. And at 6PM I received a supplement to the newsletter mentioning my site. From there the word spread, and the rest is history.

There are many people who have helped out with the One-Step site. For the Ellis Island work theres Michael Tobias, Erik Steinmetz, and Yves Goulnik. For the Census work theres Joel Weintraub and Dave Kehs. Joel in particular has done an incredible amount of work on the census pages over the years. Also there are the more than a hundred volunteers whom I cant mention individually, but who have helped transcribe the data needed for various One-Step forms. And finally theres my wife who has put up with my erratic working hours over these years.

To all of you I say thank you.